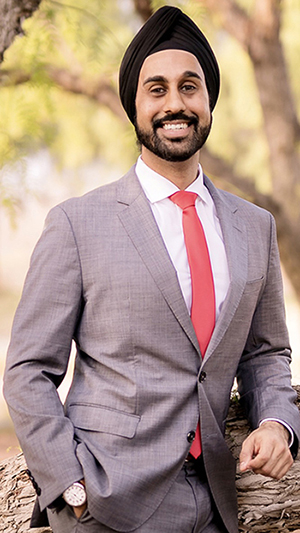 Sanjum Samagh was born and raised in Southern California, Dr. Sanjum Samagh attended Rancho Bernardo High School in San Diego where he graduated as valedictorian and ranked first in his class out of over 720 graduating seniors. While at RB High, Dr. Samagh was a varsity tennis player and named Scholar-Athlete of the Year. He was also one of three graduating seniors elected to the Rancho Bernardo Hall of Fame for his service to the community.

Dr. Samagh began his medical training at Stanford University where he graduated with a Bachelors in Human Biology and a Masters in Biological Sciences with an emphasis in Neuroscience. He then went on scholarship to the University of California, Irvine School of Medicine graduating with Honors in Anatomy and Orthopaedic Surgery. Prior to residency, Dr. Samagh completed a 1-year research fellowship at the University of California, San Francisco, where he studied the effects of rotator cuff tears. His research throughout his training resulted in over twenty peer-reviewed publications and abstracts with presentations at national and international conferences. His research work was recognized and awarded by the Western Orthopaedic Association.

Dr. Samagh completed his Orthopaedic Surgery residency training at the world-famous Cedars-Sinai Medical Center in Beverly Hills, CA (Ranked the #3 hospital in Orthopaedic Surgery by U.S. News and World Report) where he honed his skills by caring for both the indigent population of Los Angeles and celebrities alike. During his 5th year of residency, Dr. Samagh was elected by his faculty and peers to serve as the Academic and Administrative Chief Resident.

He completed his fellowship in orthopaedic sports surgery and sports medicine at Northwestern University in Chicago, IL (Ranked the #9 hospital for Orthopaedic Surgery) where in addition to general orthopaedic sports medicine procedures, he trained in hip arthroscopy and total shoulder replacement. During his fellowship, Dr. Samagh served as the assistant team physician for Major League Baseball’s (MLB) Chicago Cubs, the National Hockey League (NHL) Chicago Blackhawks, and Northwestern University’s Big 10 football team. He also served as a medical advisor to the National Baksetball Association (NBA) during the NBA Draft Combine. He has a special interest in arthroscopic surgery of the hip, knee, and shoulder and currently serves as the Head Team Physician for Palomar College Athletics.

Font Resize
Contrast
Accessibility by WAH
Call Us Text Us